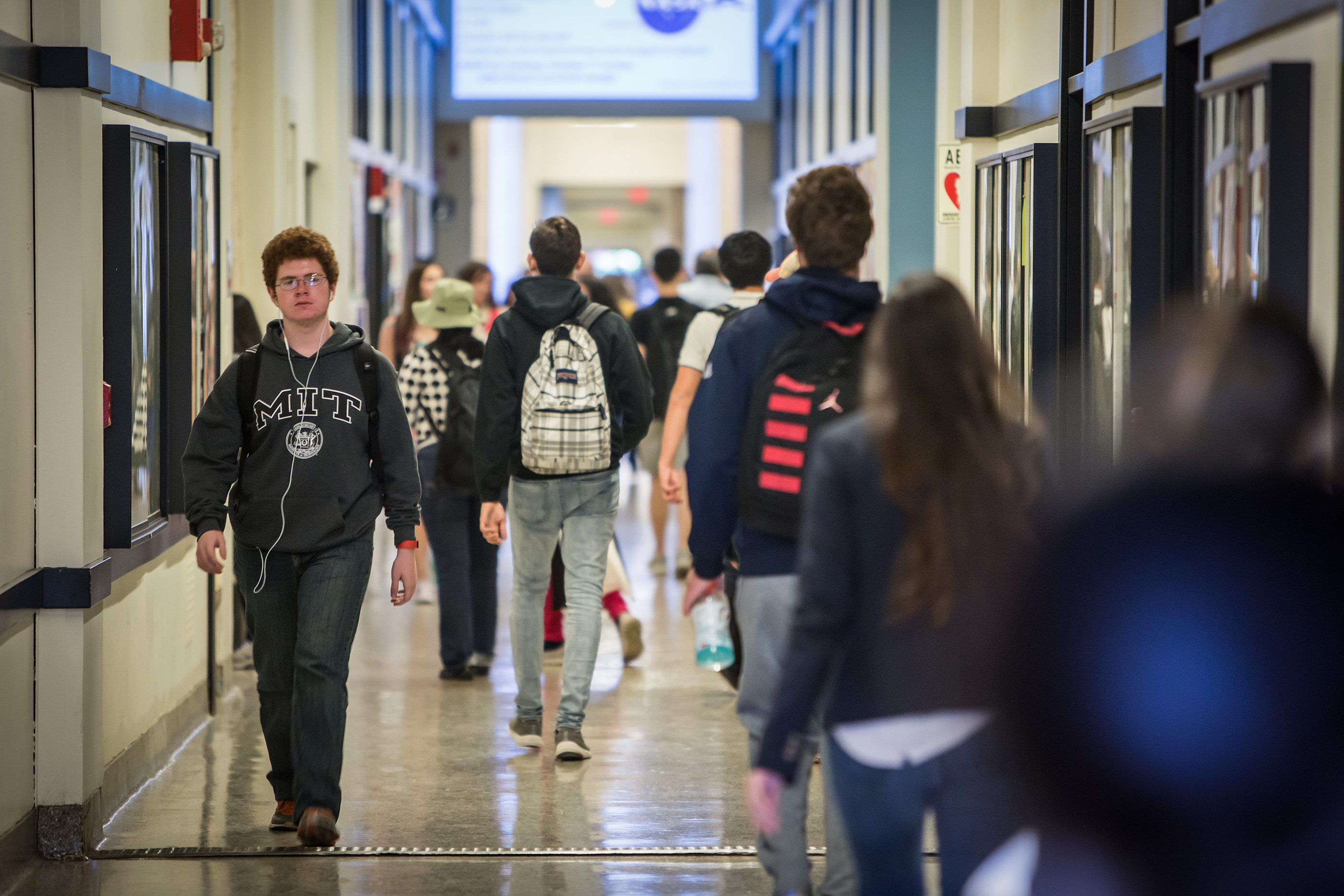 The MIT campus is built to connect people. Some structures, such as the Stata Center, the Sloan Building, or the Media Lab Building, offer large lobbies, flexible labs, and common spaces to enhance collaboration. MIT’s Infinite Corridor – one-sixth of a mile long – brings together thousands of people daily. Aerial walkways connect the campus research building.

Do all these design elements really help people work together? A study led by scholars from MIT has revealed new details about collaborations on the institute’s campus. Overall the study, which looked at email traffic among faculty, researchers and staff on campus, confirms that physical proximity matters for workplace collaboration, but adds new wrinkles about how it happens.

For example, people are more likely to communicate via email after meeting each other at a campus eatery, compared to a crowded aisle. The study also found that email exchanges were more common among researchers whose workspaces were connected to indoor halls rather than outdoor pathways. And greater physical proximity can’t replace email communication between people who don’t know each other well—they’re more likely to email each other even when working closely. .

Andres Sewtsuk, an associate professor in MIT’s Department of Urban Studies and Planning (DUSP), says, “Studying how spatial relationships can influence social interactions has long been of interest to scholars and sociologists of the built environment. ” The authors of a new paper detailing the results of the study. Whereas in previous work often used survey data for conversation, here on-campus email information added hard data to the research.

“We were interested in taking this idea of ​​spatial relatedness further and investigating more subtle aspects of it that were not well covered in prior research,” notes Sewtsuke.

Those findings apply not only to MIT but to other organizations as well.

“These ideas are equally explored beyond MIT in other work environments such as companies, organizations, or even public sector institutions,” says Bahij Chausi, a researcher at the MIT City Form Lab and a co-author of the paper. May go.”

The paper, “Spatial structure of the workplace and communication between colleagues: A study of e-mail exchange and spatial relatedness on the MIT campus,” was published online in March by the journal Advances. social network,

The author is Chancy; Raunak Basu, a doctoral candidate in DUSP; Martina Mazzarello, postdoc in the MIT Senseable City Lab; and Sewatsuke, the Charles and Ann Spaulding Career Development Associate Professor of Urban Science and Planning in DUSP and head of the MIT City Farm Lab.

allen curve and so forth

A large body of scholarship has examined workplace interactions – often influenced by the late Thomas Allen, a professor at the MIT Sloan School of Management, whose interest in the subject stemmed from working at Boeing. Allen’s research in the 1970s and 1980s found that greater closeness has a stronger association with greater collaboration among engineers, a phenomenon denoted by the “Allen Curve”.

To conduct this study, researchers used anonymized email data collected by MIT’s Information Systems and Technology Group in February 2020, a month before the COVID-19 pandemic changed campus routines. Data tracks how many bilateral email exchanges took place between research units on campus, such as departments or laboratories; Scholars examine the number of individuals in a unit to estimate the specific amount of person-to-person exchange.

The team then examined the spatial relationships between research units to see how the built environment might interact with email patterns. In total, the study spanned 33 different departments, laboratories and research groups and 1,455 office occupants.

The scholars also modeled potential walkways to the office or lab of MIT workers based on MIT’s 2018 Commute to Work survey, while estimating the total foot traffic or congestion of each aisle and dining space on campus. Sewatsuke’s research includes extensive modeling of pedestrian routes in city settings using such methods.

The study led to several specific, nuanced conclusions—notably the idea that proximity to the specifics of the built environment matters. For starters, other things being equal, workers in research units located near similar dining facilities are more likely to email and chat.

“Cafeterias are places where verbal and visual communication is an important part of the eating culture, especially in research environments like MIT,” says Basu.

Not venturing outside also affected behavior—at least, this happened during the Massachusetts winter season during the study period. For research units that are basically the same distance apart, those connected by internal corridors tended to communicate more than those separated by external space, even when that communication was in the form of email.

Basu says, “We clearly saw that if people’s offices are connected through indoor infinite corridor system, the logical connections between their offices need to engage in their email exchange as compared to requiring external paths. More likely.”

As an added wrinkle, however, really busy aisles tend to produce brief greetings compared to exchanges that lead to follow-up communication. Sewatsuke says, “We found that if the aisle where person A is walking from person B’s office to work becomes more congested, then it makes A and B less likely to engage in an email exchange. “

However, this doesn’t seem to be the case with a very crowded cafeteria, which encourages later contact, if anything. “A more crowded cafeteria can provide more opportunities to engage in group conversation, where new social connections can emerge between people who are introduced to interpersonal relationships,” Sewtsuke says.

At least, the effects of physical proximity are themselves related to pre-existing relationships. For people already familiar with each other, research shows, closeness leads to more face-to-face interactions; For those who were previously unfamiliar with each other, closeness accounts for a large proportion of emails exchanged before meeting people.

The researchers hope that their methodology may suggest ways to place new faculty or employees in useful places where they will be able to interact more easily with others.

“It is possible to use our findings to identify where such locations are within each department and school,” Sewtsuke says.

Campus planners can continue to build on the clear views at the Stata Center and the Sloan Building, which have large ground floor cafeterias and “strategically place social lounge or dining facilities in locations that have access from surrounding offices, and the possibility of passing Is [by] is the highest, ”says Sewtsuke.

At universities and tech-firm campuses, Sewatsuke suggests, when new building projects are being considered, it “strategically evaluates spatial connectivity to surrounding departments to evaluate their locations and circulation systems.” with which they have the most potential for combined research.”

Of course, MIT, other universities, and large companies can’t always reconfigure themselves quickly. But over time, good planning and design can increase interdisciplinary work, collaboration and generate serious meetings between people. Or, as the authors put it in the paper, “planning environments to encourage greater interaction across different groups may offer a way to bridge silent social networks and allow information exchange between otherwise unlikely parties.” can encourage.”