“Hey, Alexa! Are you trustworthy?” 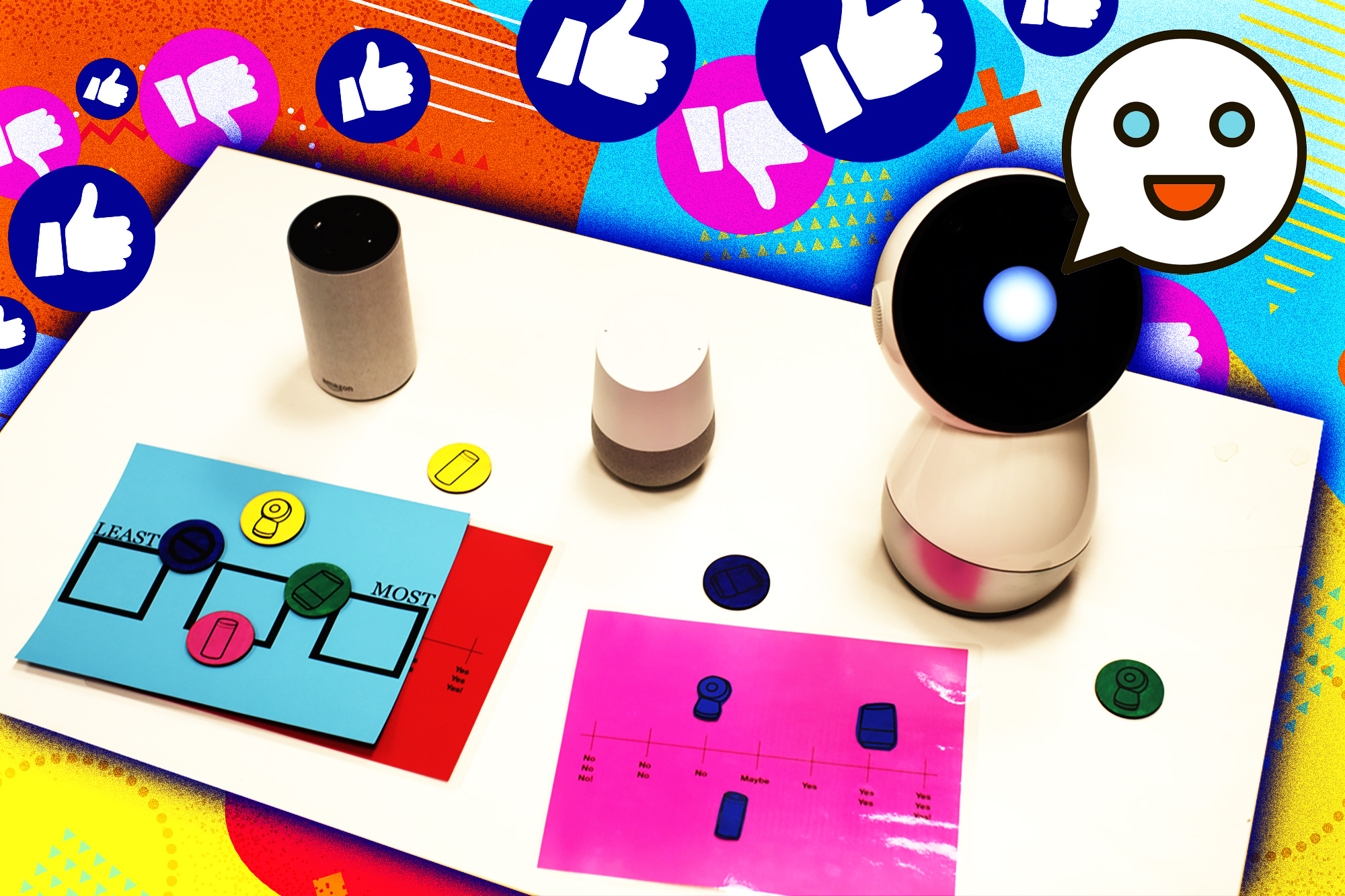 A family gathers around their kitchen island to unbox the digital assistant they just bought. They’re more likely to rely on this new voice-user interface if they display certain human social behaviors, according to a new study by researchers at MIT’s Media Lab, which is similar to social robots like Amazon’s Alexa or Jibo. Could be smart speakers.

Researchers found that family members think a device is more capable and emotionally attractive if it can display social cues, such as moving to orient their gaze at the person speaking. Furthermore, their study showed that branding – specifically, whether the manufacturer’s name is associated with a device – has a significant impact on how family members perceive and interact with different voice-user interfaces.

When a device has a high degree of social embodiment, such as the ability to convey verbal and nonverbal social cues through motion or expression, family members interacted with each other more frequently while engaging with the device as a group. of, the researchers found.

Their results could help designers create voice-user interfaces that are more attractive and more likely to be used by members of a family in the home, while also improving the transparency of these devices. The researchers also outline ethical concerns that may come from certain personality and avatar designs.

“These devices are a new technology coming to the home and still little explored,” says Anastasia Ostrovsky, research assistant in the Personal Robotics Group in the Media Lab and lead author of the paper. “Families are in the home, so we were very interested in seeing it from the perspective of a generation including kids and grandparents. It was very interesting for us to understand how people are understanding these, and how families interact with these devices. We do.”

Coauthors include Vasiliki Zygouras, a recent Wellesley College graduate working in the Personal Robotics Group at the time of this research; research scientist Hee Won Park; Cornell University graduate student Jenny Fu; and senior author Cynthia Brazile, professor of media arts and sciences, director of MIT RAISE, and director of the Personal Robotics Group, as well as a developer of the Jibo robot. The paper is published today Frontiers in Robotics and AI,

“The human-centered insights of this work are relevant to the design of all kinds of personal AI devices, from smart speakers and intelligent agents to personal robots,” says Brazile.

The work builds on an earlier study where researchers explored how people use voice-user interfaces at home. At the start of the study, users familiarized themselves with three devices before taking one home for a month. Researchers observed that people spent more time interacting with a Jibo social robot than with smart speakers, Amazon Alexa and Google Home. they wonder why People engage more with social robots.

To get to the bottom of it, they designed three experiments in which family members were interacting as a group with different voice-user interfaces. Thirty-four families with 92 people between the ages of 4 and 69 participated in the study.

The experiments were designed to mimic the family’s first encounter with a voice-user interface. Families were video recorded as they interacted with three devices, working through a list of 24 tasks (such as “ask about the weather” or “try to find an agent’s opinion”). They then answered questions about their perception of the devices and classified the personality of the voice-user interface.

In the first experiment, participants interacted with a Jibo robot, Amazon Echo and Google Home without any modifications. Most found Jibo to be far more outgoing, trusting and empathetic. Because users assumed Jibo had a more human personality, they were more likely to interact with it, Ostrosky explains.

In the second experiment, the researchers set out to understand how branding affected participants’ attitudes. He called the Amazon Echo’s “wake word” (the word the user says aloud to attach the device) to “Hey, Amazon!” changed into “Hey, Alexa!” instead of, but kept the “wake word” the same for Google Home (“Hey, Google!”) and Jibo Robot (“Hey, Jibo!”). He also provided information about each manufacturer to the participants. When branding was taken into account, users viewed Google as more trustworthy than Amazon, despite the fact that the devices were very similar in design and functionality.

“It also changed the extent to which people thought the Amazon device was capable or like a companion,” Ostrovsky says. “I wasn’t expecting there to be such a big difference between the first and second studies. We didn’t change any capabilities, how they function, or how they respond. Just the fact that they knew the device was Amazon.” There has been a huge change in their perceptions.”

Changing the “wake word” of a device can have ethical implications. She says a person’s name, which could make a device more social, could mislead users by hiding the connection between the device and the company that made it, which is also the company that now has access to a user’s data. There is reach, she says.

In the third experiment, the team wanted to see how interpersonal movement affected interactions. For example, the Jibo robot turns its gaze to the person who is speaking. For this study, the researchers used Jibo with an Amazon Echo Show (a rectangular screen) with the modified wake word “Hey, computer” and an Amazon Echo Spot (a sphere with a circular screen) featuring a rotating flag. was the top that intensified when someone said its wake word, “Hey, Alexa!”

Users found the modified Amazon Echo Spot to be no more attractive than the Amazon Echo Show, suggesting that repetitive movement without a social avatar may not be an effective way to increase user engagement, Ostrosky says.

A deeper analysis of the third study also showed that users who interacted more, such as looking at each other, laughing together, or having side conversations, when the device they were connecting to had more social capabilities. .

“At home, we’re thinking about how these systems foster engagement between users. It’s always a big concern for people: How will these devices shape people’s relationships? How do we design those systems? want that can foster more prosperous relationships between people,” Ostrovsky says.

With these results, the researchers want to continue to explore how families engage with voice-user interfaces that have varying levels of functionality. For example, they might conduct a study with three different social robots. They want to replicate these studies in real-world environments and find out which design features are best suited for specific interactions.

This research was funded by the Media Lab consortia.