For more than sixty years, scientists have been searching the universe for possible signs of radio transmissions that would indicate the existence of extraterrestrial intelligence (ETI). In that time, the techniques and methods have matured considerably, but the greatest challenges remain. Aside from never detecting radio signals of extraterrestrial origin, there are a wide range of possible forms of such transmissions.

In short, SETI researchers must assume what a signal would look like, but without the benefit of any known examples. Recently, an international team led by the University of California Berkeley and the SETI Institute has developed a new machine learning tool that simulates what a message from extraterrestrial intelligence (ETI) might look like. This is known as setigen, an open-source library that could be a game-changer for future SETI research! 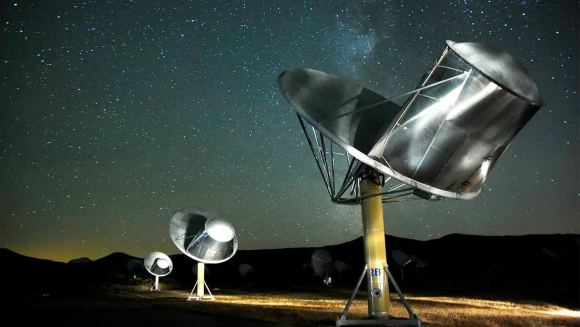 The research team was led by Brian Braziecki, an astronomy graduate student at UC Berkeley. He was joined by Andrew Simian, director of the Berkeley SETI Research Center, and researchers from the SETI Institute, Breakthrough Listen, Dunlop Institute for Astronomy and Astrophysics, Institute of Space Sciences and Astronomy, International Center for Radio Astronomy Research (ICRAR). ), and the Goergen Institute for Data Science. 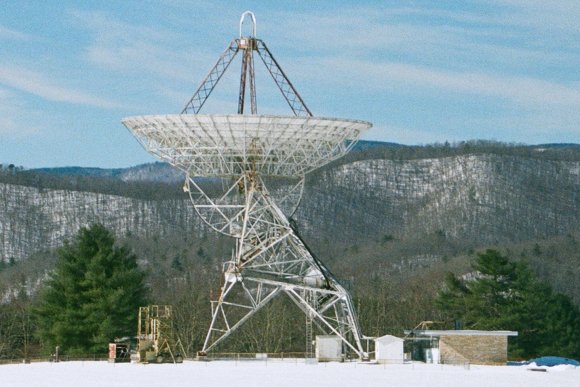 Since the 1960s, the most common method of SETI involves searching the universe for radio signals that are artificial in origin. The first such experiment was Project Ozma (April to July 1960), led by the famous Cornell astrophysicist Frank Drake (creator of the Drake equation). The survey relies on a 25-meter dish at the National Radio Astronomy Observatory in Green Bank, West Virginia, to monitor Epsilon Eridani and Tau Ceti at frequencies of approximately 400 kHz to 1.42 GHz.

These searches have since expanded to cover larger areas of the night sky, wider frequency ranges and greater signal diversity. As Brzezki explained to Universe Today via email:

“In the 1960s, the idea was to focus on the region around a well-known frequency where neutral hydrogen emits radiation in interstellar space at 1.42 GHz. Since this natural emission is prevalent throughout the Milky Way, the idea is that any intelligent Civilization would be aware of this, and would likely target this frequency for transmission to maximize the chance of detection. Since then, especially as technology has advanced rapidly, all axes of measurement Radio SETI has expanded with

“We can now take measurements immediately in bandwidths of several GHz. As storage has improved, we can collect vast amounts of data, allowing high resolution observations in both time and frequency directions. The same token Since then, we have surveyed nearby stars and other directions in the Milky Way, to maximize exposure to potentially interesting directions in the sky.” 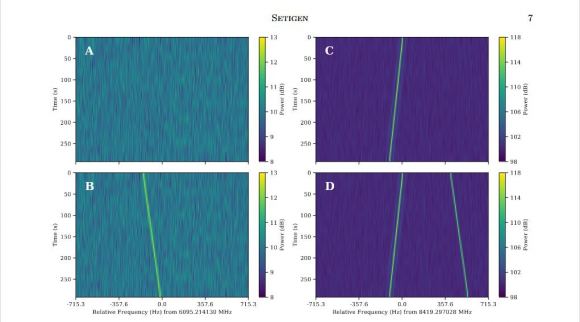 Another major change is the inclusion of machine learning-based algorithms designed to find transmissions among the radio background noise of the universe and correct for radio frequency interference (RFI). The algorithms employed in the SETI surveys have fallen into one of two categories: those that measure voltage time-series data and those that measure time-frequency spectrogram data.

“The raw data collected by radio antennas is a voltage measurement; a radio wave induces a current in the antenna, which is read and recorded as a voltage,” Brazzi said. “A radio telescope is actually an antenna augmented by a parabolic dish to focus a large area of ​​light, increasing resolution and brightness. It turns out that the intensity is proportional to the voltage squared. Furthermore, we measure the frequency and care about intensity as a function of time (when and where the possible signal).

To achieve this, Brziecki says, astronomers begin by employing algorithms that calculate the power of each frequency being observed toward the input time series data. In other words, the algorithm transforms the radio signal data from a function of space and/or time into a spatial frequency or temporal frequency dependent function – aka. A Fourier Transform (FT). By squaring this, astronomers can measure the intensity of each frequency in the data-collection period.

“To obtain a complete spectrogram, an array of intensities as a function of time and frequency, we take a segment of the voltage-time series, obtain the FT, then repeat this process over the entire observation so that we to effectively stack a series of FT-data arrays on top of each other in the direction of time,” Brzycki said. ,[O]Once you decide on a time resolution, we find the number of time samples required and FT calculate how much power is contained in each frequency bin. , 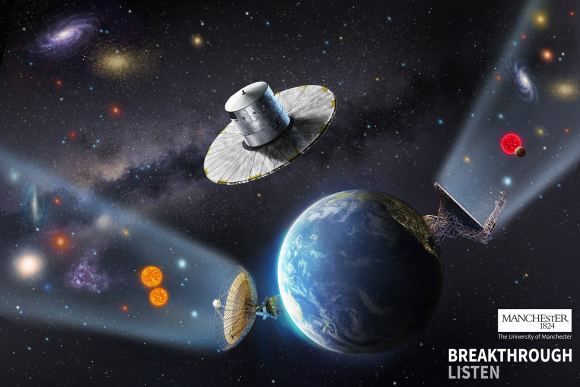 The primary search algorithm used by SETI researchers is known as the “anomalous tree didoppler” algorithm, which shifts the spectrum of radio waves to correct for frequency drift and maximize the signal to noise ratio. . The most comprehensive SETI search program to date, Breakthrough Listen, uses an open-source version of this algorithm known as TurboSETI, which formed the backbone of many “technical signature” searches (aka signs of technical activity). acted as. As Brzycki explained, this method has some drawbacks:

“The algorithm makes the assumption that a potential SETI signal is continuous with a high duty-cycle (meaning it is almost always ‘on’). Looking for a continuous sine-wave signal is a good first step because it It is relatively easy and inexpensive for humans to produce and transmit such signals.

“Since TurboSETI is targeted for straight-line signals that are always ‘on’, it may struggle to pick up on alternative morphologies such as broadband and pulsed signals. There have been attempts to detect these other types of signals.” Additional algorithms are being developed, but as always, our algorithms are only as effective as we make the perceptions of the signals they are intended for.”

For SETI researchers, machine learning is a way to identify transmissions in raw radio frequency data and classify multiple types of signals. The main issue, says Brzycki, is that the astronomical community does not have a dataset of ET signals, which makes supervised training difficult in the traditional sense. To this end, Brzycki and his colleagues developed a Python-based open-source library called SetiGen that facilitates the production of synthetic radio observations.

“What Setigen does is facilitate the production of synthetic SETI signals, which can be used in fully synthetic data, or added on top of actual observational data to provide a more realistic noise and RFI background ,” Brezzi said. “In this way, we can produce large datasets of synthetic signals to analyze the sensitivity of existing algorithms or to serve as the basis for machine learning training!” 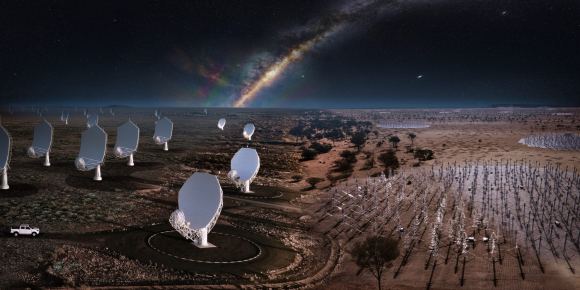 Composite image of SKA with all elements in South Africa and Australia combined. credit: SKAO

This library standardizes synthesis methods for search algorithmic analysis, particularly those used by existing radio observation data products such as Breakthrough Listen. “These come in both spectrogram and complex voltage (time series) formats, so a method of generating simulated data could actually be useful for testing production code and developing new processes,” Brezzi said.

Right now, algorithms are being developed for multi-beam observations, using setigen to produce simulated signals. The library is also constantly being updated and improved as SETI research progresses. Brzycki and his colleagues also hope to add support for broad-band signal synthesis to aid search algorithms that target non-narrow signals. More robust SETI surveys will be possible in the near future as the next generation of radio telescopes become operational.

Alas, still the most limiting factor with respect to SETI is our extremely limited frame of reference. When it comes down to just below it, astronomers have no idea what an extraterrestrial signal will look like because we’ve never seen one before. This, paradoxically, makes it difficult to tease out evidence of technical signatures amidst the background noise of the universe. As such, astronomers are forced to take a “low-hanging fruit” approach, which means looking for technological activity as we know it. 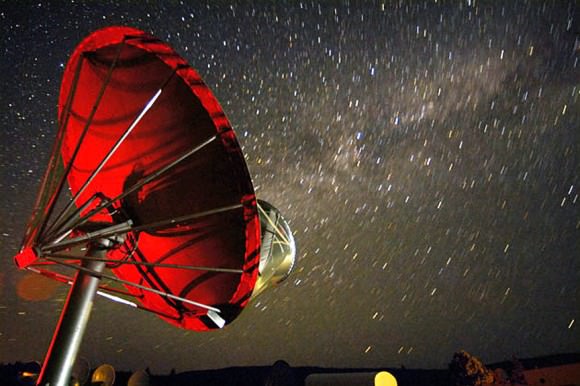 One of 42 dishes in the Allen Telescope Array that searches for signals from space. Credits: Seth Shostak / SETI Institute.

However, by setting parameters based on what is theoretically possible, scientists can reduce the search and increase the odds that they will someday find something. As Brzycki summed up:

“The only possible solution to this is some kind of unsupervised machine learning survey that undermines our assumptions; work is being done on this front. Cetigen certainly relies on this assumption – the synthetic signal that anyone can produce.” It is heuristic in nature, with the user deciding what they should look like.

“At the end of the day, the library provides a way to build datasets of potential signals to evaluate our existing algorithms and to develop new discovery methods, but the fundamental issues will always be where and when – the best we can do That’s keeping it on view!”

At such times, it is good to remind ourselves that the Fermi paradox only needs to be resolved once. The moment we detect a radio broadcast in the universe, we will know for sure that we are No In the universe alone, that intelligent life can and does exist beyond Earth, and is communicating using technologies we can detect!