Honey the Astrobee must understand and transport Bumble the Astrobee: a daunting feat for a small robot. To overcome this, Honey needs to understand Bumble’s trajectory, position himself right, and avoid confrontation at all costs. 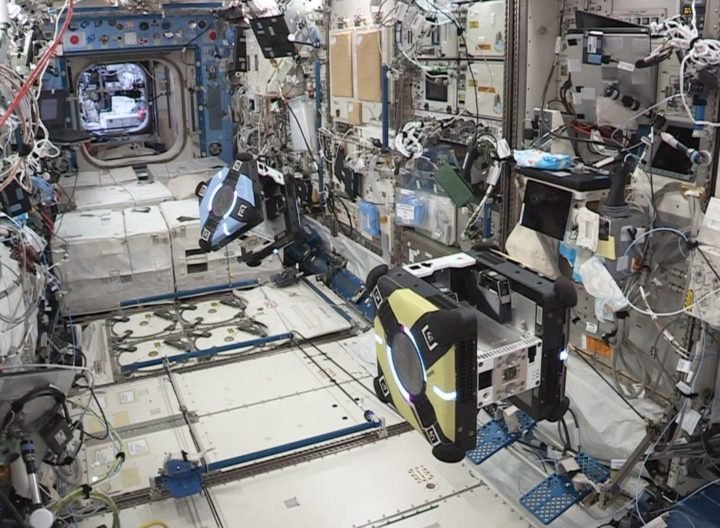 artificial intelligence (AI) helps the cube-shaped robot to accurately assess the situation. The experiment is part of the TumbleDock/ROAM project, which is being carried out by the German Aerospace Center (Deutsches Zentrum für Luft- und Raumfahrt; DLR) together with its partners on the ISS. The experiments are part of an effort to determine the best way to remove dangerous pieces of space debris from Earth orbit.

“The two robots on the ISS will simulate an orbital scenario,” says Roberto Lamprillo of the DLR Institute of Robotics and Mechatronics in Oberpfaffenhofen. Debris is accumulating around the Earth: satellites that are no longer working collide with others and form large amounts of unobstructed objects.

Experts fear what is known as Kessler syndrome, a condition in which pieces of debris collide with each other and break into smaller pieces that do the same, creating a large area of ​​debris. More than 900,000 pieces of space debris now threaten safety in low-Earth orbit.

Get set, hold the position and figure it out!

DLR is also working on technology to reduce the risk posed by space debris. For example, it would be possible to capture and reduce pieces of debris so that they burn up in Earth’s atmosphere (active debris removal; ADR) or repair satellites, preventing them from becoming debris (on-orbit servicing; OOS). can be stopped.

In both cases, a safe approach to a piece of debris or a faulty satellite must be achieved first. That’s exactly what AstroBiz Honey and Bumble are doing in the Japanese Experiment Module (JEM) on the ISS. Robots work completely independently.

Honey the Astrobee represents the active spacecraft (chaser), while Bumble plays the role of the target satellite. The plan is for the chaser to move to a pre-determined position with respect to the target and maintain its position in a synchronous orbit.

From this position, the target satellite can be captured in future missions with the robotic arm installed on the chaser. The chaser must accurately predict the target satellite’s motion, plan a collision-free flight path, and successfully execute GRACE. A successful capture requires reaching the satellite with high accuracy.

“To make the exercise more realistic, virtual solar panels are attached to the target satellite. The aim is to show that the autonomous activities being conducted on the chaser can meet all the necessary requirements under realistic conditions,” says Lamprillo “The first test was carried out during the experiments on the ISS in early February, and the critical components supplied by the DLR performed excellently.”

These findings are important to the continued development of the robotic chaser. Software to help guide HONEY (Chaser Astrobee) and achieve realistic tumbling movements of Bumble (target satellite) was developed at the DLR Institute of Robotics and Mechatronics and successfully tested on the ISS.

The robust control system was developed jointly with MIT (Massachusetts Institute of Technology), which also developed control systems for the chaser and target satellite. The components may still be used for further tests aboard the ISS to demonstrate different perspectives of the target satellite. NASA is also a participant in the TumbleDock/ROAM (Operations Relative to Autonomous Maneuver) project, which provides astrobees and controls them throughout the experiments from the NASA Ames Research Center in California (USA).